After over 6 decades, we should have it down by now, yet musicians all over the world spend countless nights struggling to catch some sleep over one stupid issue: a 3-pickup guitar with only 2 tone knobs.

In fact, 67% of the posts on the Luthier’s Guitar & Bass Technical Discussion section of TheGearPage.net for 2019 were about this very issue, making it second overall on the site, trailing closely behind shitty Klon posts. We get it, your glorified TS pedal is exactly whatever you idealized a Tube Screamer to be, and whenever you decide to sell it you’ll be able to buy 17 ODs that all sound the same.

Anyway, here’s a stupid video about a stupid easy way to solve a stupid issue.

This comes up a lot, so I decided to expand a bit about it elsewhere and I’m doing a shameless self-copypasta here.

The question was basically what happens on position 4 (neck/middle) on your typical Strat wiring, with Tone 1 for the neck and Tone 2 for the middle pickup.

The usual stuff was mentioned, the “Eric Johnson” type wiring, the 1 Volume 1 Tone wiring, the “do I have two capacitors when two tones are active” thing came up… yeah, so, copypasta:

END_OF_DOCUMENT_TOKEN_TO_BE_REPLACED

I recently posted a capture from Fender’s Game of Thrones Sigil Collection, and boy did people get their panties up in a bunch about the infamous Jaguar bridge.

I’ve said a bunch of stuff about this bridge all over the internets, stuff like “It’s a fucking work of engineering art that most of us never bothered to learn how to use properly.” Yeah, arrogant asshole me said that, and I stand by it.

The thing is fucking genius, but people just can’t figure it out.

The whole design of this bridge, which is in itself tragically misunderstood, is purposefully made so that no rolling parts are required (this gets mentioned a lot).

The holes on each stud of the bridge allow you to adjust the inside screw with a hex wrench. These screws are pointed in their bottom ends where they make contact with the inside of the mounting inserts, which are concave, and should give you a perfect rocking motion of the bridge as the strings are loosened and tightened back by the arm bar, with minimal friction. This ensures the right pivoting position and no slipping around during operation, preserving the original setup you did. How awesome is that?

If everything is set correctly, the rocking bridge and the arm bar movement should be precisely synchronized, and you should be as stable as a Tele.

Now there’s some names thrown around when talking about these bridges, supposed solutions to the many “issues” these bridges carry with them; mostly Mastery and Staytrem (nothing against them, let the record show that).

First off, whatever your feelings about these designs are, please stop calling them “superior”.

Arguing about superiority between Fender’s and other later designs based on his own is like comparing Kobe Bryant to Michael Jordan. Kobe might beat him on a 1 vs 1 game today, but it’s simply because he took over where Jordan left off and then put his own spin on it, while Jordan basically changed the entire game. The dude came up with shit people had to digest for a decade before they could wrap their heads around what the fuck was going on.

That was Fender, and many other greats of the time, with or without room for improvement. They changed the game, and that’s what engineering is about. That’s why I call this bridge “a work of engineering art”.

What bridges like Mastery address is the issue of the stock offset saddles being slotted like a screw, which causes the strings to pop if you’re too aggressive on your hybrid picking. If you’re not, then don’t worry. I’m a hamfisted asshole in my playing and my strings don’t pop. Besides, it doesn’t allow you to intonate strings individually. The bridge consists of two solid, deeply slotted slanted bars, attempting to achieve some sort of fixed string compensation which cannot be fine tuned. Like it or not, that’s what they offer.

Another frequent issue that is addressed would be rattling, but if you take a few minutes to set everything correctly, this is another issue that should go away on a stock bridge.

Another name that you’ll hear is Staytrem. That’s just a Mustang bridge, and it does the same thing, fix issues you shouldn’t have except for the aforementioned popping which, unless you’re Gregg Koch, shouldn’t be an issue. They look cool as fuck though, just as the Mustang, and you can intonate strings independently, but here’s the last thing…

One anecdotal item that came up just yesterday, arguing this very issue elsewhere, is that a couple people had felt the harmonic nature of the guitar was not the same after switching bridges, so take that for what it’s worth. Others didn’t care. I would, but I also like my Les Pauls heavy and I don’t mind a square neck joint, so there’s that.

All in all, there’s a lot of the usual mythical horseshit going on around about these bridges, but in the meantime nobody takes the time to set them up properly. The same thing goes for the electronics on these things, which I’ll leave for another day.

Set them up before spending hundreds on pointless “upgrades”, or 15 bucks on a Mustang bridge. “Leo got it right” seems to be a running gag for a good reason.

Treble and Bass saddles, coarse for the thick ones, fine for the thin ones… for 35k, is it too much to ask for? 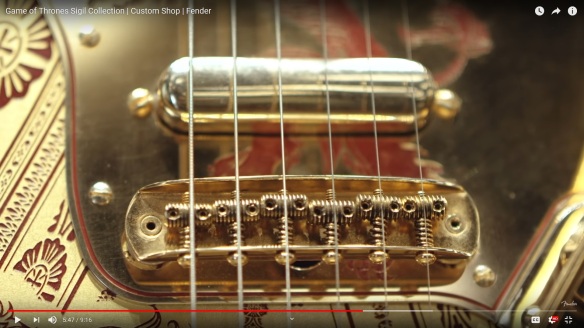 Check it out yourselves.